It’s normal to crave a giant bowl of hot chili in the middle of summer, right? Good, moving on.

Sunday’s breakfast of peachy eggs was hard on CJ (the man can’t stand fruity food), but that was before he knew what was for dinner.  He’s convinced I just like to torture him, which probably isn’t that far from the truth.

I just can’t help it.  FRUIT BELONGS WITH REAL FOOD.  I know you’re with me on this one.  If you had come home from the Farmer’s Market with freshly dried chipotle peppers and a pint of cherries I know you would have done the same thing.

Then again it was 101 degrees out.  I very well could have been suffering from heat exhaustion.  Regardless, I came home and made a huge batch of smokey kinda spicy kinda fruity chili.  And guess what? 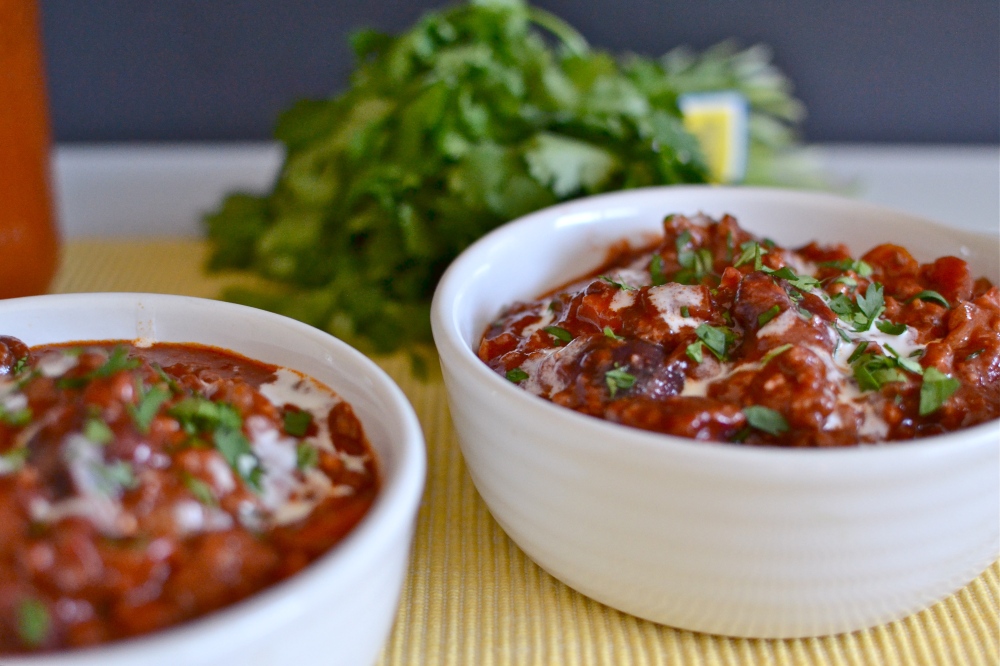 1-2 tbsp chili powder, depending on how spicy you like it

Good pinch of salt and pepper

Heat 1tbsp oil in a large dutch oven or heavy bottomed pot over medium-high heat.  Brown the ground pork.  Remove and set aside.  Brown cubed pork in same pot, and set aside when done.  Add second tbsp of oil to pot, along with onions, carrots, salt and pepper.  Cook about 10 minutes until carrots begin to soften and onions start to break down.  Add garlic, chile powder, and cumin and cook an additional minute.

Add cherries, both meats, tomatoes, chipotle sauce, 1/2 cup water, and bay leaf and bring to a boil.  Reduce to simmer and cook about an hour until pork shoulder is tender and chili has thickened.  This is where you can add more chipotle if you would like it spicier, along with salt and pepper to taste.  Remove bay leaf and serve in bowls topped with cilantro and coconut milk.

6 dried chipotle peppers (more if you like it SPICY)

Steep dried peppers in boiling water about 30 minutes until they’re soft.  Drain.  Cut tops from peppers and de-seed them.  Place into food processor with onions, garlic, and vinegar.  Blend until smooth.  Pour chipotle mixture into a saucepan over medium-high heat.  Add tomatoes and 3 to 4 cups of water.  This depends on how thick you want it and how spicy you like it.  Bring to a boil, then reduce to a simmer and let cook uncovered for about one hour.

Store in the fridge or freezer.  I like to freeze them in ice cube trays, then dump into a bag once frozen.  This way I have chipotle cubes ready to go!

Chili stores great as leftovers for the week!